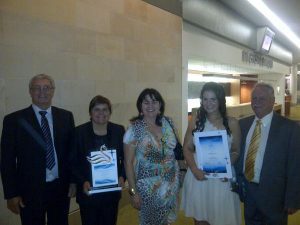 REFAP was named best Aboriginal Business at the award night held on November 9.

Ms Holborow said the recognition showed how important Aboriginal businesses were and what they are capable of.

“It definitely paves the way for all Aboriginals across Australia,” she said. “It gives a lot of confidence to the community.”

She said to establish a business everyone had to begin somewhere and the award showed what was possible.

Ms Holborow is a traditional owner and has been working in the mining industry for about 25 years.

The reason she established the company was to try and gain worthwhile and long-lasting employment for Aboriginal people.

“The cause that I believe in is that we have wonderfull opportunity up here for all people,” she said.

“We want to engage our Aboriginal communities and we want to up-skill them.”

“We’re hoping to promote a not-for-profit group that we can help and assist young women from Aboriginal skills to give them a head start especially in their career.” she said.

Small Business Minister Simon O’Brien said the businesses recognised at the awards were the “cream of the crop” of small and medium-sized businesses in regional WA.

View a PDF copy of the original article.