After about two years in existence, Karratha business Real Employment for Aboriginal People is one of three finalists in the 2012 WA Regional Small business Awards.

The nomination caps off a great year for the company who took out Best Indigenous Business at the Karratha and Districts Chamber of Commerce and Industry Business Excellence Awards, earlier this year.

REFAP operations managing director Kelly Grady said it was a “pretty significant achievement” for the business.

“The business is over two years old but it has only really been running operationally for about 14 months,” she said.

REFAP is an Aboriginal mining contracting company owned and operated with a core value of providing employment for Aboriginal people.

Ms Grady said the recognition was a huge milestone for the company and staff members.

“The exciting thing I suppose about going to the State awards is being a finalist there you’re either first, second or third,” she said.

“The other thing that’s different about us is that we’re a female-owned Aboriginal mining company and we’re a minority in that sense as well.”

Ms Grady said the reason the founders established REFAP was because of chief executive Triscilla Holborow’s drive to want to do something to help her own people.

“She saw a mining boom without Aboriginal people benefitting out of it, in terms of careers, jobs and opportunities,” she said.

The presentation evening will be held at Crown Perth this Friday. 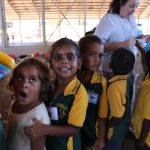 First day back at school for Roebourne Primary SchoolNews

Aged care residents given a voiceNews