More people in Western Australia’s Pilbara will be helped to get jobs and participate in their communities thanks to the Australian Government’s new $1.5 billion Remote Jobs and Communities Program (RJCP), which starts on 1 July 2013.

Minister for Indigenous Employment and Economic Development Julie Collins today announced the providers to deliver RJCP in three remote regions across the Pilbara.

“The Australian Government believes that everyone who can work should work and those who are not working should be participating in meaningful activities that contribute to the strength and sustainability of their community,” Ms Collins said.

“But we recognise that in remote areas, job seekers, many of whom are Indigenous Australians, face extra challenges in finding local jobs. We also know that employers in remote locations often have trouble finding skilled workers.”

The three remote regions whose providers are announced today are Karratha, Port Hedland and Western Desert.

“Providers in these regions will help ensure local people are ready to take up local jobs,” Ms Collins said.

“They will support individuals who are not working to participate to their capacity in training or activities that will contribute to their communities as well as making them more work-ready.”

“We are taking four jobs services functions and putting them into one,” Ms Collins said.

“Under RJCP, job seekers including those on CDEP wages, will be able to go to just one provider to get the personalised support they need. And employers will find that their local RJCP provider is able to get to know their needs better, and to help link them up with job seekers who have the skills and drive they are looking for.

“RJCP providers will also be working closely with communities in their region to set out priorities and goals for participation, training, employment and long-term development.

“The program is based on community and involvement. It will encourage and promote collaborative, community-driven, approaches to employment and participation activities.”

Ms Collins said a review of remote employment and participation services in 2011 and subsequent extensive consultations identified what was and wasn’t working in remote communities.

The Government is committed to minimising disruption for job seekers, communities and employers during the transition period.

Providers for a number of remote regions in Western Australia, South Australia and the Northern Territory have been announced today. Announcements about providers for other regions will be made in coming weeks. 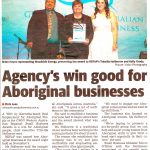