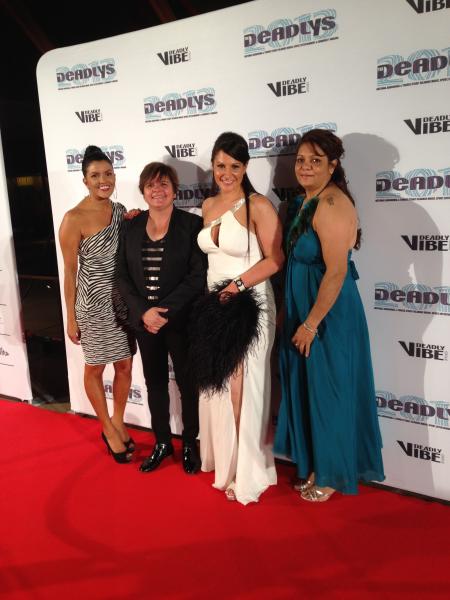 Pilbara News: Red carpet treatment and an encounter with Troy Cassar-Daley were just some of the highlights for Triscilla Holborrow from Real Employment for Aboriginal People in Karratha, who was at the Deadly Awards in Sydney recently.

Named as a finalist for the Deadlys National Aboriginal and Torres Strait Islander Music, Sports, Arts and Community Awards held on September10, Ms Holborrow travelled to the Sydney Opera House with her business partner Kelly Grady as well as her sister.

Ms Holborrow said it was a huge event and the first thing which showed them how significant it all was, came when they arrived.

“Kel got out of our car and from the car in front Troy Cassar-Daley and Paul Kelly got out, and we were like wow, we haven’t even made it up the stairs yet.” she said.

“We introduced ourselves … and we got a personal escort in by Troy Cassar-Daley.”

“We went straight up to the northern foyer, where we started off the first presentations and we sat at a table with a group that included Jessica Mauboy,” she said.

“Even though we didn’t win our category it was just wonderful to be there and to be recognized Nationally, and put Karratha on the map.” Ms Holborrow said although the nomination was for her as a personal achiever, it gave national recognition to REFAP, and reflected well on the efforts and purpose of the company as well.

“We had the vision, when we got up and running, and said it would be good to be recognized State wide in the first five years and we already achieved that with the GWN7 State Awards which we won,” she said. REFAP has also recently been named a finalist for the Regional Achievement and Community Awards in the Rinehart Development of Northern Regional WA Award category.

Ms Holborrow said while the awards were great recognition, it always had been and still was about the work REFAP did.

“We’re pretty grounded, which is why I think we’ve been successful, we just keep doing what we’re doing… it’s just all about the people, the employment and helping our welfare system,” she said.